The vegetarian and the chicken soup 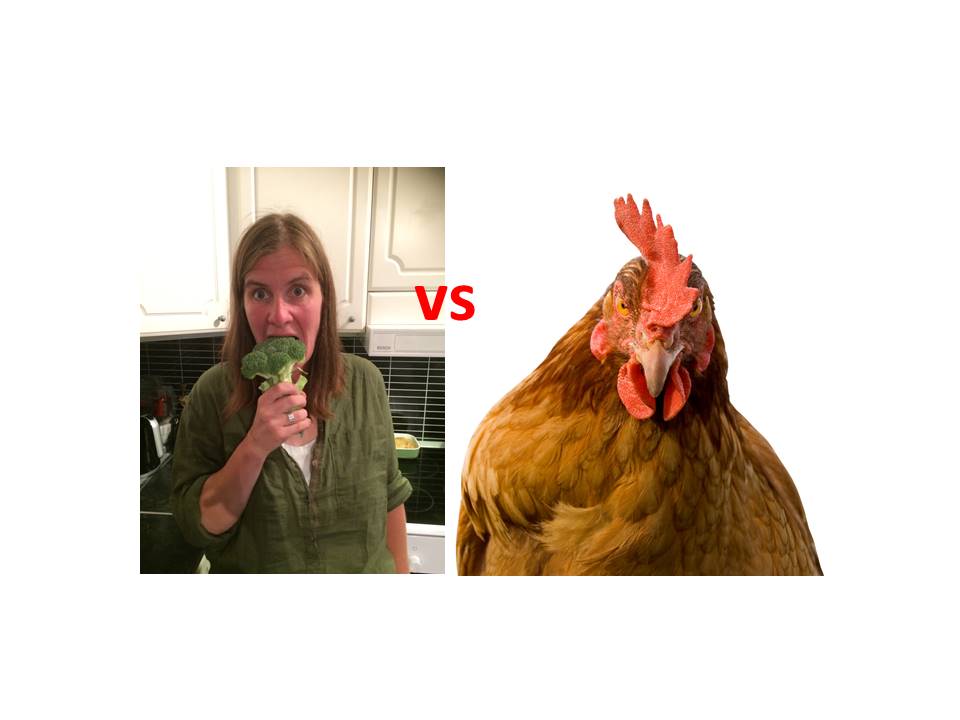 I am striving hard to be a better cook, to cook more from scratch. This is partly because we are a bit skint, and partly because I have deluded myself into thinking that creating homemade wondrousness for my kids will make me a better person. It actually makes me stressed and cranky, because I am in fact a shit cook, mainly because I have the attention span of a gnat and either burn or boil dry most things I attempt to make. See my previous post on trying to bake a birthday cake. Not good.

So, when my MIL came to stay, I thought that I would ask her for advice on cooking chicken, specifically a whole organic one I had seen in the local supermarket (cheaper than buying all the bits separately). Aside from taking off the plastic wrapper, I had no idea what to do with it. I was keen to demonstrate to my MIL that I am an all-round fabulous wife/mother etc etc, and I was entertaining ideas of roasting a bit, stir frying a bit and then I had read somewhere that you could make soup out of the rest. Perfect, I thought, chicken soup, the husband can take it for lunches and brag to his colleagues about how wonderful his wife is at preparing him meals. (I told you, I am deluded).

I should say here that I am a vegetarian, have been for 26 years. Also that even when I wasn’t a vegetarian I never ate chicken; that I don’t much like cooking meat, least of all poultry. But chicken is better than turkey. Turkeys are grim. I have an over-riding memory of annual church picnics in the countryside in a beautiful location, with woods full of bluebells, proper Darling Buds of May stuff. The only downside was the turkey farm next door, with literally hundreds of the stinky, noisy buggers stuffed into a huge barn, probably all bound for Bernard Matthews. My Dad always insisted on taking us all to see them, as if it was a rare treat. It was not.

But I digress. The MIL gives me the requested lesson in cutting up a chicken into its composite parts (poor woman, on her holidays and she is stuck in the kitchen with her deranged daughter-in-law). I have frozen the bits separately so that they don’t stick together in one big lump. So far so good.

About 2 days after this, I decide to brave the soup thing. I take the carcass out of the freezer, chuck it in a big pot with some veg and herbs and stuff and slop a load of water on top. This is how to make stock, right? Then when it was done, and not quite boiled dry, I just had to take all the meat off the bones. I get myself a gin, have a large slug and then go at it with a knife and fork. Not very effective. I then try with a wooden spoon. Even less effective. So then I tried to get a bit off by hand. Ew, no. So the whole pot went into the fridge and after 24 hours, I fessed up to the husband that I was attempting chicken soup, blah, blah and needed him to get the meat off. 3 minutes later it was done.

I really don’t know why I put myself through it. He did not marry me for my kitchen skills. He would rather eat burgers for lunch, not bloody homemade chicken soup which he has to politely tell me is lovely.

Next week I am thinking of trying to make a lamb stew. Don’t laugh.