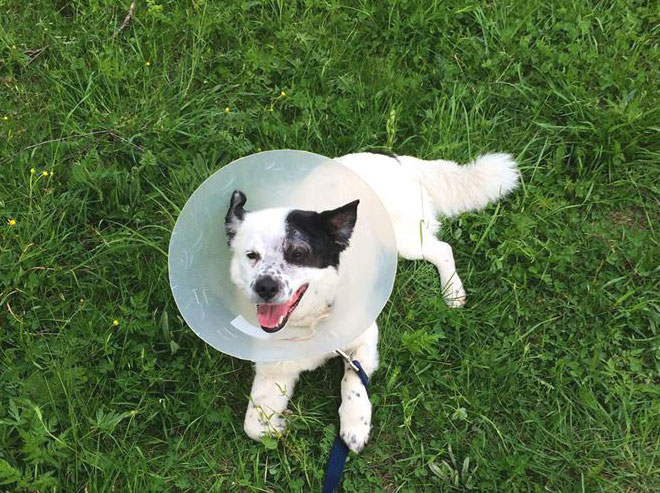 Facebook helpfully put a picture up this morning of Sam in his conehead, and I am reminded of last year, when we were just about to go on our first Scout camp as Swedish residents (this is important because it meant we all have numbers and have to quote them at least twice a day)… and of course it rained and rained and rained as if we were in the UK. And there was a lot of mud. And we all went, dogs too. This was OK for Pippa (now re-named Pippi, because Pippa means shag in Swedish and there’s no way you want to be shouting that out loud in the park, though I do keep forgetting)…

But poor Sam had a cone on his head. You know, one of those big see through plastic ones to stop him scratching and licking his wounds, because, well, I ran him over. I realise that sounds really bad, and it was fairly awful (note the british understatement). But, don’t worry, it was only on my bike. Sam decided to run after a cat under the bike on the way to pick son #1 up from school.

So, we had a dog with a big hole in his head bleeding profusely, a toddler who was a bit confused about why Mummy was swearing in 2 languages and a small boy who was sent to try and explain in English to his Swedish teaching assistant why Mummy was crying and needed to know where the vet was.

The very calm (!!!) decision was made that it would be easiest to take the bus to the vets. We locked up the bikes at school and took the bleeding dog (and the 2 boys and the other dog) to the bus, this was a good plan until I got on the bus and realised that my travel card had run out that day. With a look of combined horror and disbelief at the mad English woman and the bloody carnage pooling on the floor, the bus driver quickly assessed the situation and sensibly decided that we should get on, quickly.

I’ll skip the bit about sitting in the waiting room at the vets, trying to explain to the vet why (a) I had run over my dog (b) didn’t have Swedish insurance and (c) that I had actually come on the bus and no, did not have a car to pick the dog up with later that day and that the next day we had to go to camp…

So, that is how conehead came to camp. In the pouring rain, in a very small tent made for 2 people but actually having to accommodate 4 people and 2 dogs… I suspect this did nothing but confirm to our Swedish friends that we are in fact crazy. I mean, who in their right mind does this kind of thing? Ah, yes, me.